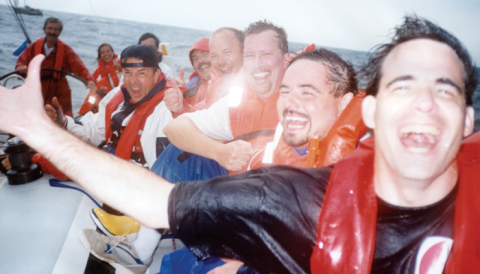 First published in the CYC Blinker, the official program for the Race to Mackinac – July 2011

We weren’t supposed to bring anything heavy on the race. This was a serious racing program. But I did; a good camera with extra lenses and film, in case something big happened.

It probably wasn’t a great idea to take my beloved and fragile 35mm SLR on a deck awash in waves, pelting rain and spray. But I did, just long enough to snap two images: one of the dad at the helm, daughter at his side, with the rest of the stunned-crazy crew lining the rail, and another of the son on the bow looking like a water-logged superhero mid-battle.

The camera was never the same after the drenching, but the two images are, for me, iconic and real as now. I remember the moment exactly as photographed; a vivid and fond sailing memory.

The summer had been unbearably hot, super-heating the land and Lake Michigan by the start of the Race to Mackinac. A couple of low pressure systems met somewhere north of Denver and marched across the hot plains, gathering more energy when they collided with the warm lake. The massive front smashed the mid-lake fleet, packing an initial seventy knot wallop of wind, bigger than the classic summer squall by a factor of two and enough to frighten even seasoned offshore sailboat racers.

The blast ripped sails, broke booms, parted sheets and forced sailboats to run. We had dropped and lashed our headsail, but were neither fast nor impressed enough to reef the mainsail. Perhaps we should’ve been. We were forced to ease fast and run for the Michigan shore barely in control. The rig bucked and twisted like a long bamboo fishing pole, crushing the chocks and then pounding back and forth at the partners sounding like cannons. I was sure the rig would come down. It didn’t.

Instead, the boat shuddered and charged ahead at almost twenty knots, speeds not yet seen by its crew.

Soaked to the bone in cotton tees but feeling record speeds, the crew saw the camera and burst into wide grins and loud shouts. It was as if the old fragile Minolta had broken the ice — shifting the focus from the terror of gale-force winds and the ominous banging in the rig to the ecstasy of the surf and the warm freshwater spray. What was scary and uncomfortable was now a joyride.

END_OF_DOCUMENT_TOKEN_TO_BE_REPLACED

You are currently browsing entries tagged with Race to Mackinac at Saving Sailing.