This article appears first in the May 2013 issue of Spinsheet Magazine.

As a kid, my all-time favorite book was Paddle-to-the-Sea.

Remember it? Author Holling Clancy Holling takes us on a trip with a toy indian in a birchbark canoe from a Canadian headwater north of Lake Huron, through the Great Lakes, down the St. Lawrence river, past Montreal, and onto the Atlantic Ocean.

The story begins with an indian boy, perhaps 10 years old, carving “Paddle” during the winter months after learning that the water in the brook near his home is destined to tumble over the land all the way to the sea. He thinks he might never make the trip himself, so he decides to send a representative in his place.

Paddle has many adventures on his way to the sea. He is visited by snakes and birds. He is nearly sliced up in a saw mill, run down by ships, and he disappears for months under snow and ice during the long winter. He plummets down the falls at Niagara, and slips silently past noisy, dirty cities. He soldiers on and eventually reaches the Atlantic.

I need not retell the entire story. The book, a 1942 Caldecott Medal winner, is timeless and still in print.

As a kid, I was spellbound by the possibility that a bold traveller could go so far with his tiny boat, never stepping a foot on shore. No roads. No trains. No traffic. No un-passable obstructions.

END_OF_DOCUMENT_TOKEN_TO_BE_REPLACED

Read page 43 of the May 2013 issue of Spinsheet to find out what one great children’s book can do. 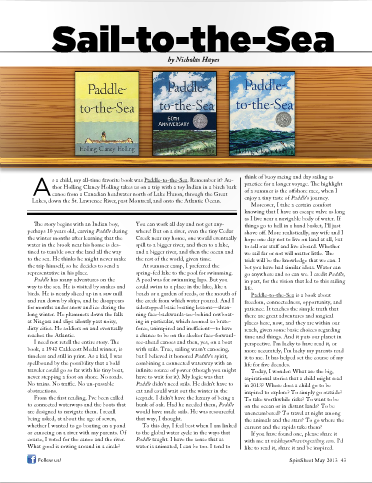 You are currently browsing entries tagged with paddle-to-the-sea at Saving Sailing.