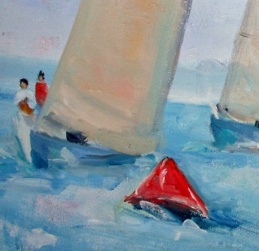 First, the physics: We rig a sleek, lightweight canoe with enormous wings, some that face up into the sky and some that face down into the sea. We listen to our senses and nature’s cues. We point things in roughly the right direction and are always awed when pure, free, invisible solar power grants us forward motion. Impressive speeds require tiny bits of energy, and sailboats use what they get very efficiently, leaving absolutely no waste or wake.

It is an engineering marvel; a scheme to trick water and air to cooperate to give motion. So good that it approaches the possibility of perpetual motion. Tuned right, a sailboat can go on forever. Set the sails, lock the tiller and stand down. Some cross oceans this way.

But a sailboat needs people to go well, and then it seems to take life. Small adjustments and constant care from teams return comfort, safety and speed.

And so the psychology: The sailor at the helm feels both directed by nature and, for a time, an anointed director of a privileged natural state. Sailors seek what they call “a groove” — a few moments or occasionally hours where the boat is precisely balanced and the driver’s concentration follows only water and wind.

On bigger boats sailed by groups, the groove only comes when the boat and the team are in perfect balance. Through their work, a sailboat’s passengers share rich, lasting emotional connections on par with the mingling of singers in a gospel choir or players in a jazz quartet. It is no coincidence that jazz players also seek a “groove,” a mix of rhythm, melody and riff that falls into place, and feels right, then and there. Once sailors or jazz musicians find their groove they are almost certainly addicted. It can be organic, mystical, erotic, magical and musical all at once.

Unfortunately Americans have abruptly stopped sailing. Participation is down more than 40% since 1997 and 70% since 1979. Less than 1% of Americans remain self-described sailors, they are doing less of it and are enlisting fewer newcomers. Current economics are not helping.

Why is something as rich, substantial and significant to the people that do it facing such trouble?

Of course, sailing is not alone in this downturn. Participation in many activities that yield rich personal and cultural rewards, whether the aforementioned “groove” or strong interpersonal connections, is on a precipitous decline. To find out why, we will explore what activities like sailing mean to us culturally, economically and personally.

Let us start with basic age demographics: The average self-described American sailor is a white male, 40.1 years old; but the number is deceiving. The largest (43%) age group of sailors are 55 and up. The average age of a sailboat owner is 54.8 years old. The ratio of men to women is about seven to one.

There is a meager bubble (13%) of young sailors between 15 and 24 years old, both girls and boys. However when today’s sailors reach 25 they generally quit. So proportionately, almost nobody between 25 and 44 is sailing.

Sailing was and remains a favorite activity of the oldest boomers. Compared with US census data, the average sailor is older than the general population by about 11 years, so its decline precedes boomer retirement and death by about a decade.

A crucial fact: key age groups that might sustain the activity — kids under 13, women and early parents — are essentially not sailing at all. From the basic population data, it is easy to conclude that unless sailing can soon attract newcomers in all age groups under about 40 and from all genders and a wider range of income levels — something that it is not doing well today — the future of the activity is bleak.

Demographic trends hide an important truth: apart from the numbers, there are modest actions that can be taken; basic decisions that can be made by individuals or within small groups to improve the situation.

Perhaps we can save sailing if we start on a personal, family and community level. Here are some ideas, through stories involving people and their day-by-day choices.

§ One Response to Excerpt